Imagine a world without bank vaults. Would it be chaotic? Yes, absolutely! This is why the need for vault doors is so crucial. Without them, you would have to rely on security guards and armed personnel to protect your money from thieves and other people trying to steal what's yours.

Round vault doors are typically round because they provide more secure protections than rectangular ones. A round door doesn't offer any corners to a robber to exploit, and if the door is at least 12 inches thick it will resist most explosives. The average bank vault door is 20 inches thick, which means that you need a truck full of dynamite to blow one up.

Why is the bank vault door round?

You may even wonder why the bank vault door is often round, not rectangular. This is all because both frame and door can be accurately cut roundly within a big lathe to build them sheltered fit. Otherwise, if it is rectangular, each point is not able to fit and as difficult as it can lead to distortion. Traditionally, it works by pushing some big rods into the round manhole covers. If the rods are the same length, it will be easier.  The round shape means that you cannot utilize stress concentration at the door corner. Moreover, never use a jack to force the bank vault’s door frame open as you do with a rectangular safe door as it will squeeze the remaining of the door tighter.

What is a bank vault made of?

The round vaults are generally made from steel with a combination of concrete. This material is nearly the same as materials in construction works. For more strength, it relies on its thickness. Nowadays, around vault is made from a modular concrete plate that makes use of a singular proprietary mix of additives and concrete for immense strength. The concrete is actually engineered for the greatest resistance of crush.

To create the panels, the vault door is molded by using special concrete. However, it can also be made in various ways instead. There is a difference between a panel mold and a door mold as a hole is inserted within the lock and the door will be layered with stainless steel.

A round bank vault door was very trendy in the early 20th century. It was an iconic image for the high security of a bank. Maintenance issues, cost, and manufacturing complexities were things that made them changed into rectangular ones.

How to determine the effectiveness of a bank vault? 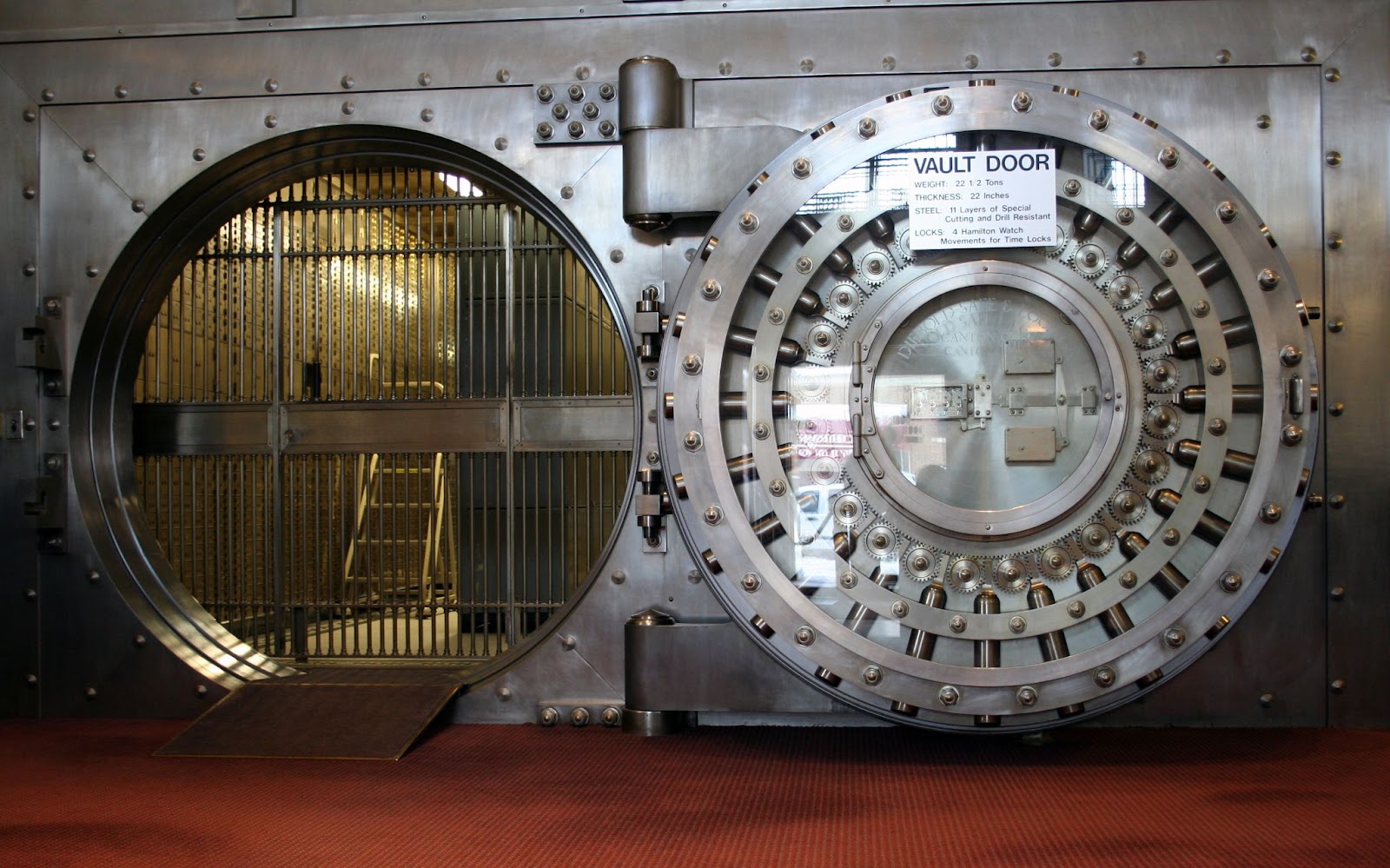 A bank vault is considered to be more effective than safes. The effectiveness of a bank vault is actually measured by its performance toward a mock force lock. To provide burglary protection, ore was an essential element of the bank vault door. Nowadays, the modern door is designed with Herculite material eight inches thick for the door barrier. The use of Herculite material is also able to reduce vault door weight.

The vault door is locked securely with 24 3 inches polished bolt along with numerous re-lockers. The locking system is opened by rotating the ship grip after unfastening those re-lockers by rotating the main wheel ¼ rotate. The locking system is generally controlled by the combination of locks which two are mainly the standard ones while a third is elective. Those locks are able to set either the door lock open or both locks are needed. A time lock with three movements is used to control the door opening, either optional or mechanical. It is fully protected by a barrier made from glass. If it is attacked, the barrier will break. Once the barrier is broken, there are some re-locking devices that automatically lock up the vault system.

How secure is a bank vault?

It may be one of the most famous symbols of safety, but there are many ways to rob a bank. From lock-picking to explosives, it would take an expert thief and some luck to get away with cash. As soon as you walk into the lobby of a bank, there is a large set of vault doors leading to one or more vaults. These will open automatically when prompted through card or voice identification. Once inside, you'll see various security measures in places such as cameras and biometric scanning devices (fingerprint scanners). Vault walls are made from thick steel and reinforced concrete to prevent drilling or cutting them open without detection.

If you have a safe deposit box at a bank, there might be risks that you might not know of. Read more about whether bank vaults are airtight and what to expect with the security of safe deposit boxes inside a bank vault.

For alternatives to storing your valuables at a bank, TL-15 and TL-30 safes provide a higher measure of burglary protection.

What are the security measures in the operation of a bank vault?

One way that banks can ensure their vaults are secure is by using an electronic system technology called biometrics which identifies people through physical features such as fingerprints or irises. In addition to biometrics, there's also a need for guards with guns who patrol around the bank premises at all times so that they're on hand to deter any potential thieves from trying anything funny while inside the building. The number of guards needed depends entirely on the size and layout of the room and building.

Round doors are more secure than rectangular ones, and the thickness of the around door is its most important feature. Vault doors are typically made from steel or concrete to withstand an attack, but it's how thick they are that will really keep them safe. The round vault door is the standard for most bank vaults. With its hard-to-break corners and thick walls, it's one of the safest ways to protect your valuables from thieves and robbers. If you're looking for a way to secure your home or business against burglars, consider installing a commercial-grade vault door that has been built using industry-leading security standards like those found on bank doors.