The two words burglary, as well as robbery, are very often used interchangeably in television shows, movies, as well as the internet. However, both robbery and burglary are two completely different crimes having different criteria, processes of investigation, and even implications for the victim. Let’s discuss the major differences between robbery and burglary. Furthermore, you need to also know how you can respond should you become a victim of a robbery or a burglary. Finally, nothing beats prevention so know what the pros say about different ways to protect yourself or your home in case of any such unfortunate incidents.

Robbery versus burglary can be understood best by the FBI’s definition.  Robbery is defined as taking or attempting to take anything of some value from a person or a group of people especially by force, threat or violence especially by putting the victim in fear. The FBI defines burglary as a typical property crime while having the intent to commit it. In case of burglary, a person directly enters a building premises without taking prior permission and commits a crime. Burglary is classified to be a violent crime committed against somebody or a person.

Please note that we are not providing legal advice in this article and that you should seek out a law firm that will meet your needs.  Also, note that if you are a victim (or accused of such crimes) work with an attorney with the right specialization.  Good criminal lawyers or criminal defense lawyers can be found through your local Chamber of Commerce.  Know that confidentiality need not be your concern as your details will be covered under an attorney-client relationship.

Crime statistics are available at the national level and local level, and unfortunately the rate of violent crime which was steadily falling, has recently picked up since 2020.  Violent crimes include murder, rape, robbery, and aggravated assault.  Property crimes include burglary, larceny-theft, petty theft, and vehicle theft.

How Often A Robbery Occurs (plus the frequency of other crimes)

Based on FBI 2017 data, the frequency of crimes helps us understand the probability of becoming a victim, which can help you decide which ones to prevent.  Some of the data might surprise you.  I found it surprising that motor vehicle thefts are less often than burglaries; and that murders are more frequent than aggravated assaults. Clearly, law enforcement has its hands full and we support those on the front lines of fighting theft, burglary, and robbery.  USASafeAndVault.com offers special discounts to Veterans and first responders to thank them for their service.

Here are some statistics that give you a relative sense of frequency, though the data is older (2017) and recent trends point to slightly higher rates (i.e. lower numbers below).

Burglary offenses and crimes of theft

Robbery Vs Burglary Vs Theft Vs Larceny

Robbery involves taking property and can be defined as a serious crime of attempting to take something that is valuable and that too by the threat of force; or by putting the victim into continuous fear. In accordance with common law, robbery is defined as taking the property of others while having the intent of permanently depriving that person of a property by means of fear or force. Therefore it can also be called theft or larceny accomplished by an assault.

Robbery almost has a clearance rate of 29.3 percent which means that it is more likely to be solved when compared to burglary. Also, robberies where a person has been severely injured, merit better resources for finding the culprit. In accordance with US law, robbery is classified to be a violent crime and it even carries much stiffer sentences than burglary. Here are some of the criteria of robbery:

Attempting To Take Property of Someone

This sort of crime doesn’t actually need to be successful in order to be counted as a robbery. In case somebody tries snatching a purse and gets unsuccessful, then that person has still committed the crime.

Attempting To Take Anything Valuable

In most cases, monetary value is used to determine how serious a particular offense is. For instance, in case a necklace having sentimental value is snatched from an owner's neck, it doesn’t matter that it is worthless. However, financially it is still considered to be a robbery.

Property Taken Directly From A Person

A robbery isn't committed unless and until something is actually taken from somebody. If a criminal breaks into a house and steals something while nobody is present at that time, then it can’t be considered to be a robbery but it might be a case of burglary.

Victim Of Robbery Is Scared Or Hurt

Burglar involves breaking directly into or entering a structure in order to commit a certain type of crime such as a threat. Entering or breaking into someone's premises does not always require a door or window to be broken or even a lock to be picked. An offender can even enter with the help of a key or through an unlocked opening. Also, the structure can often be anything ranging from a commercial building, house, vehicle, or even temporary dwelling places. Furthermore, theft or other related crime doesn’t need to be successful in order to be charged with the intent to commit burglary.

Theft can be defined as taking someone’s property with the intent of permanently depriving its owner of its use. Theft crimes usually involve some sort of physical belongings and money.  It doesn’t necessarily apply to things such as real estate or a piece of land. In crimes that involve theft the owner often doesn’t know that the theft has occurred until after the fact. If the value of something or the property exceeds an overall threshold, as defined by the local authorities, theft can be classified as grand theft. Grand theft is a felony, and its penalties might increase significantly over time. Also in many places, theft is referred to as larceny and its terms are sometimes interchangeable.

Much similar to that of theft, larceny can be defined as taking hold of someone’s property while having the intent of depriving its owner of its use. Some jurisdictions might be having different definitions for the terms theft and larceny, or at times they might also be used interchangeably. Usually, simple larceny can be considered as a misdemeanor involving theft of property which is lesser than the local threshold for grand larceny. 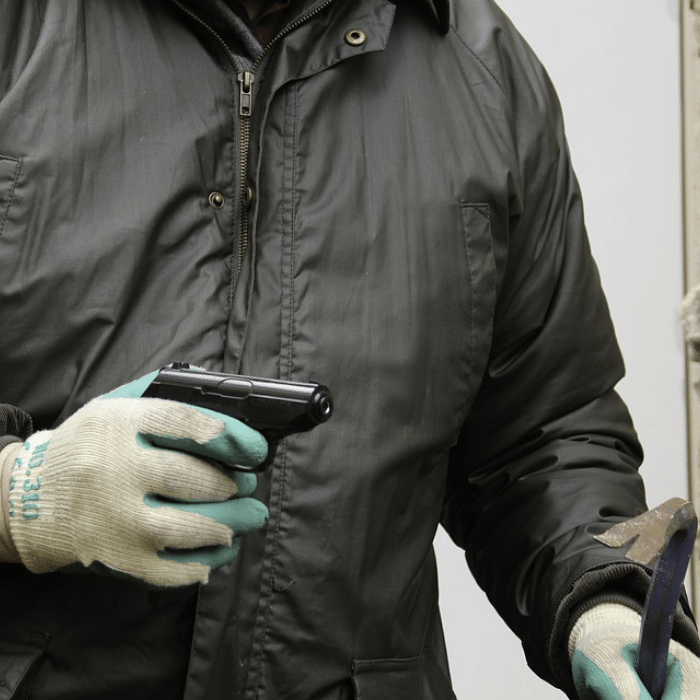 Armed Robbery: Armed robbery, according to criminal law is an aggravated form of theft that usually involves continued use of a particular type of lethal weapon especially to perpetrate violence against a victim. Armed robbery falls under a serious crime and it might result in permanently traumatizing its victims both psychologically and physically.

Aggravated Burglary: Burglary is said to be committed especially when a person trespasses a building while having the intention to assault as well as steal a person. Burglary can be termed as aggravated if a person is present during the act and the offender makes use of a weapon for assaulting the victim.

What Is The Difference Between Larceny and Burglary?

If you are thinking of robbery versus burglary, then you must know that burglary usually involves unlawfully entering a structure or building, and larceny does not. However, while a person is committing the crime of burglary then he/she might also commit larceny. On the contrary, you might commit larceny without entering the property of others. This is the key difference between robbery (larceny) and burglary.

When it comes to robbery and burglary, remember the best defense against any of these crimes are you. It is always important to familiarize yourself with these crime prevention tips and put them into practice whenever necessary. The below-listed tips are low cost and all it requires is a bit of thoughtfulness and awareness.

Install A Deadbolt Lock At Home

Usually, deadbolt locks can be locked with the help of a key from outside and a thumb turns on from inside. Also, remember to lock your doors every single time you leave the house even if it is for a few minutes during the day. In the United States, almost 1/3rd of burglaries happens because someone forgets to lock the doors.

Usually, a home alarm system at times can be a really effective burglary deterrent while fitting in people's needs. Also, don’t forget to check your alarm system every month.

Try To Make Use Of Proper Exterior Lighting

Try placing a light on top of every door. Double cone light on each corner of your home can help in fighting burglars and also lights up windows.

Remember to mark all your valuables with the help of an engraver. Marking your property helps in serving as a deterrent to all would-be burglars and it further helps police in properly identifying and returning stolen property.

Outside home doors must be made of metal or solid wood and should at least be three to four inches thick. Door frames should also be made of equally strong materials and they must fit the door properly.

Pay Attention To Your Surroundings

Nowadays almost every person makes use of a smartphone and at times it can be a bit distracting. Walking while making phone calls or texting might be an invitation for criminals. Robbers can easily make out that you aren’t paying enough attention to your surroundings and you can become a victim of a robbery.

Always walk at a steady pace keeping your head up and avoid carrying too many packages. Always send a message to your surroundings that you are confident and calm.

Going Out Of Town Precautions

In case you are going out of town for an extended period of time, try making arrangements with your neighbor in order to collect your mails while keeping an eye on your house. Also, try to leave lights on while you are out of town. A dark house and piled-up mails help in indicating to criminals that you are not at home.

The best way to prevent burglary or robbery is to stay aware of your surroundings. Most of the time it is seen that criminals who are committing robberies don’t approach people who are looking right in their eyes or paying attention to them. However, criminals are always in search of those persons who aren’t really paying attention such that they can sneak upon them. 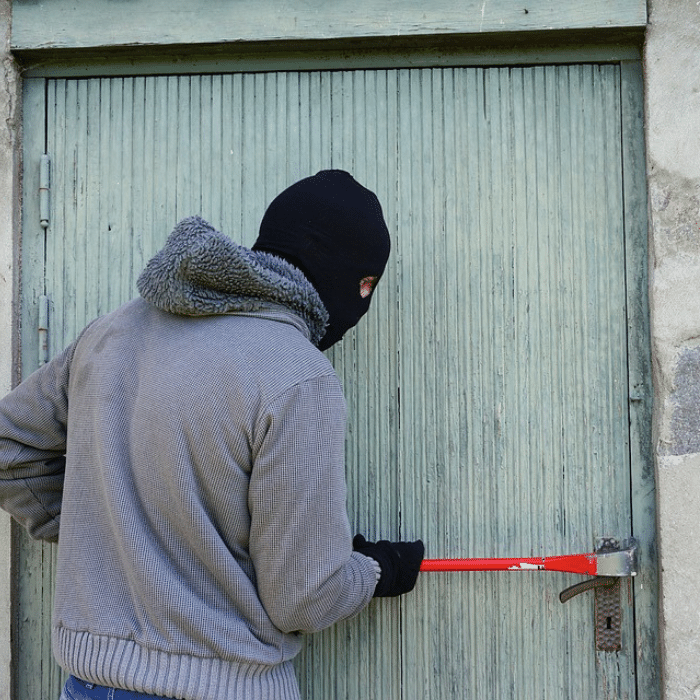 Invest in a Home Safe (especially if you have guns)

Safeguard your most valuable possessions by investing in a safe, gun safe, or safe room or vault.  A good rule of thumb is to spend about 10% of the value of your possessions on a safe.  With prices ranging from under $1,000 to over $10,000 there is a home safe that will meet your needs at your price.  Guns are particularly susceptible to burglary and theft, so invest in a good gun safe.

Knowing the difference between the crimes of robbery, theft, larceny, burglary makes you better educated on the law, the likelihood of becoming a victim, and some preventative actions you can take.  Be safe.