When I invest in a fireproof safe, I expect it will protect my precious treasures if there is a fire.  Not an unreasonable demand, in my mind. But what if, in the heat of battle (no pun intended), the so-called fireproof safe does not do its job? Do I have a false sense of security buying such as safe? It would be tragic if I evacuated under threat of fire, assuming that my precious stuff was safe, when, in fact., I would have been better off taking some of them with me. We gathered some actual stories of regular folks who were happy they did get a safe, that gave them some solace in the midst of tragedy. Read on to find out whether a safe is a good idea under the most severe conditions of a wildfire. Don’t miss what you need to do so that you don’t lose it all, as not all safes protect your valuables in a wildfire.

Can a fireproof safe survive wildfires?

Yes. Fireproof safes can survive wildfires but only if they are not subjected to temperatures and durations in the fire that exceed their ratings.

To ensure that a fireproof safe will survive a wildfire, it must be rated to the fire duration and temperature that exists in the wildfire.

If a fireproof safe is used for valuables, then it needs to be waterproof and/or fireproof up to 1700 °F (which wildfire temperatures can reach) but has metal or ceramic fusibles which do not melt above 1700°F.

Wildfires are unpredictable, fireproof ratings are not. For wildfire safety, don't guess or hope that a fireproof safe will survive a wildfire - choose one that is correctly rated.

What Happens in Wildfires?

From condos to modest homes in wildfire-prone areas, nearly everything inside starts burning when wildfires strike. That includes many of the things we assume will survive: houses, cars, even fire hydrants. But one object you might think has the potential to make it out alive is safe. Well-built safes are usually made of thick steel and can stand up to tons of pressure, not to mention fires. Fireproof safes are advertised as being able to protect important documents from even the harshest conditions.

When it comes down to it, some fireproof safes really are fireproof, but most simply aren't. Labeled as fireproof doesn’t guarantee a safe to survive in a fire. Instead, if you want to know how long it can stand in the fire, you should consider its fire ratings and the types of items you store inside the safe. So, to make sure that a safe you have is adequately fire rated.

Here are some factors to consider when choosing a fire-resistant safe that helps it to survive in a fire.

After knowing how to select a good quality fireproof safe, let’s get to know why that safe cannot withstand fire. 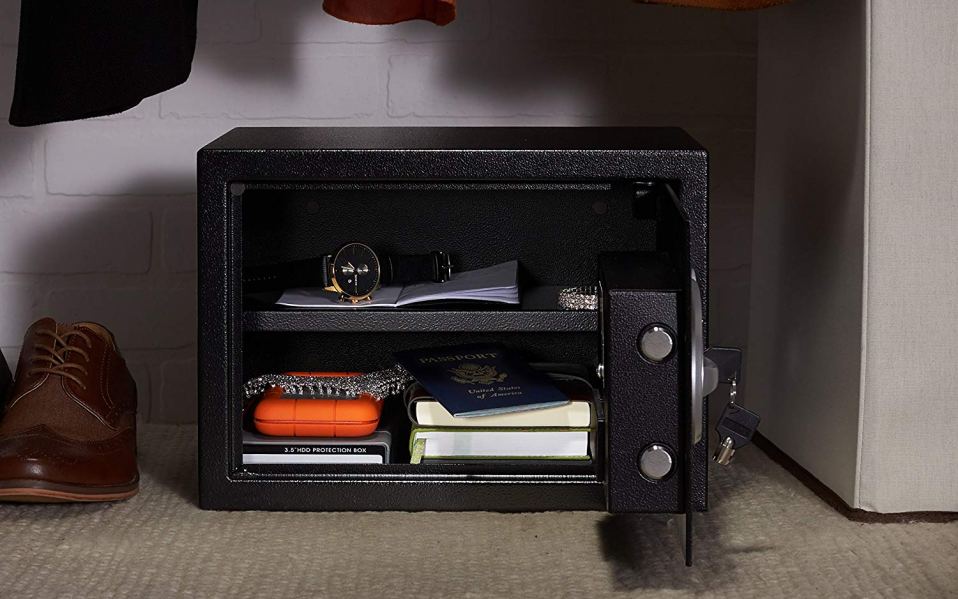 The reasons why a fireproof safe cannot survive wildfires

The material used to build a safe affects its survival to fires. For instance, a safe made from a plate doesn’t give much protection in this case. It might be suitable to store paper collections or documents but it cannot survive a fire.

Fire ratings define the amount of time the safe can survive in certain temperatures. The longer it can stand from heat and fire the safer it is to protect your valuables. If your safe’s extended time is beyond fire ratings, it means that you can expect your valuables remain safe when a fire occurs. Fire ratings begin at 30 minutes and are able to reach 120 minutes or higher.

Items store in the safe

What Some Wildfire Survivors Have to Say

Listen to the story of the owner of a Liberty Safe who lost everything except what was in his safe. Here are some items that survived: guns, pictures, important documents, jewelry, and even his kids’ beloved Elf on a Shelf had been protected from the fire. “Paper made it, photo books of kids, my wife’s grandmother’s wedding ring was intact…” Luke says. “A lot of the special items that we had as a family we were able to recover.”  However, a neighbor in the same fire was not so lucky. Even though he had a safe, he had a different brand.

Here’s the key takeaway:  Get the right brand and even safes with presumably the same rating might not be robust enough to survive a wildfire.  Go with demonstrated protection.

Listen to the story of how one resident of the devastating California wildfires of 2017, lost everything he owned (as did the rest of his neighbors) except for a fire-rated filing cabinet from Fireking.

Here are some of the things that were in the filing cabinet that survived: important documents like birth certificates, insurance records, mortgage papers, titles to cars, social security cards, important business documents, cash, and several other valuables.

Here is the key takeaway:  the filing cabinet had to be rated for the temperature and duration of the fire but also for the destructive forces of the house when it collapsed on the filing cabinet. In other words, a properly rated fire cabinet is not enough: it needs to have a strong construction as well on all 6 sides.

FAQS | What readers want to know

How long does a fireproof safe last in a fire?

Most household fireproof safes are rated to last 30 minutes at 1,550 °F. This is a common certification from both UL and ETL. The next level up is 60 minutes at 1,700 °F which offers a greater degree of security.

Is a fireproof safe really fireproof?

The short answer is yes! A fireproof safe is designed to give you time to escape in an emergency. But the amount of time offered by a fireproof safe depends on the fireproof rating or certifications it carries. These specifications are usually listed as an Underwriter's Laboratories (UL) rating. UL has six ratings for fire protection safes.

What makes a fireproof safe fireproof?

Fireproof safes are built with two walls of metal. The walls are filled with fire-resistant materials like mineral wool, calcium or sodium silicate, perlite, and vermiculite, or fire-protected concrete. The door is further protected by a fire seal that expands in case of a fire. It also protects against heat and water.

We cannot just rely on a fireproof label to know if a safe can stand in wildfires. However, it should have adequate fire ratings, be made from fire-resistant material, and contain items that can survive in high temperatures to make sure everything remains safe when a fire happens.