When you own a gun, it is important to take care of it. That means not only cleaning and maintaining your firearm on a regular basis but also storing it in the best way possible so that rust doesn't become an issue. As it is likely that at some point gun owners are likely to see some rust spots on exposed metal surfaces of firearms no matter how much one tries to prevent rust, knowing about removing rust when rust occurs is also important. In this post, we'll discuss 5 tips for preventing rust from forming on your guns and how to store them so they stay in their best condition!

The five best ways to prevent guns from rusting are:

What is rust? Why Is Rust Bad?

Rust is the by-product of the process of oxidation. It appears as a brownish discoloration that forms on iron and steel metal objects when they’re exposed to oxygen and water. In fact, rust can form within 24 hours!

There are several rust removal products on the market today that manage this job well. Use rust removers to get rid of rust as soon as it appears.

As for why rust is bad, rust weakens the metal object, making it brittle and vulnerable to breakage.  Not to mention, it looks unsightly!

Tip 1:  Storage at the right humidity

Keep it in a dry place and out of sunlight. Sunlight can make the metal contained inside your gun react with other chemicals, which will cause it to corrode. It is best if you keep your guns stored in a cool area that is free from sunlight, at the right temperature of 70-degrees F and the recommended relative humidity of 50-55%, year-round.

We recommend selecting a good gun safe which are designed to be air-tight, and which can be equipped with dehumidifiers.  We recommend gun safes from well-known brands such as Browning, Hollon, Mesa, Rhino Metals, Cannon Safes. 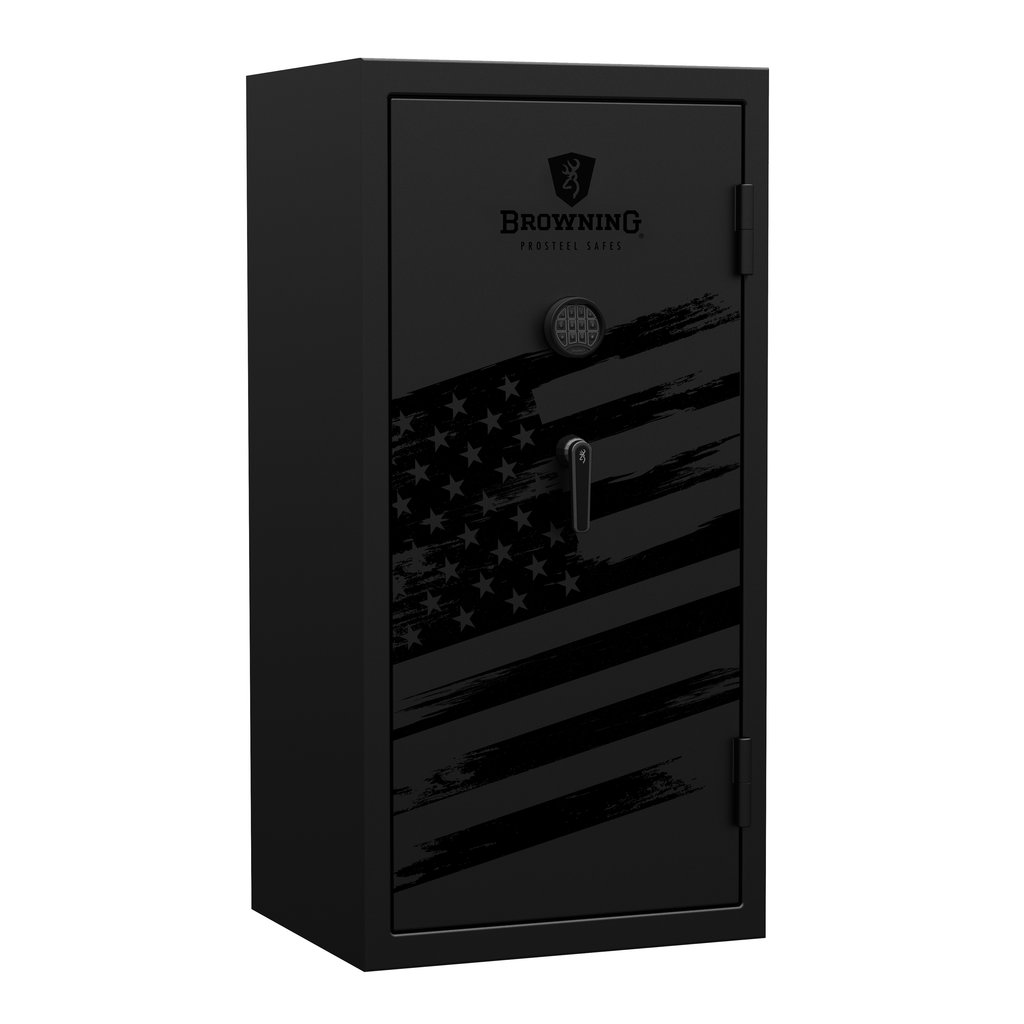 Keep your gun in its case when it's not being used for storage or if you're transporting the firearm from one location to another. The leather material inside of a typical rifle carrying case is able to absorb moisture and provide an extra layer of protection against existing rust. Here's one set of cases we like.  Yes, they are top of the line, but your guns deserve it!

If you're taking your firearm with you on a hunting trip or other activity where it is exposed, make sure the gun is completely dry before storing it back in its case and covering it up. This will ensure that sweat doesn't create an environment where the metal can rust.

No matter what, you must clean your gun completely before putting it away for storage. Even if you think there is no visible dirt or grime, make sure that you dry and wipe down every part of the gun, especially the trigger and firing mechanisms.  Keep your gun pointed up so any warm air that is moist can escape from the barrel and reduce the risk of rusting.

The best storage place for your firearm is in a cloth or fabric that can absorb moisture from inside of it before those small droplets turn into big drops on the surface of your weapon. It's important that you store your firearms in a place that doesn't have enough humidity to cause rusting.  Use good steel wool pads and some elbow grease to remove surface rust spotting before the rust spreads. It is important that when you see the first signs of rust you remove it and treat the area so no rust remains.

Don't store ammunition with your guns if you don't want to create the right environment for rusting. Some types of ammunition are corrosive as well, which will cause more damage and quicker rusting. Corrosive ammo contains potassium chlorate primers which can break down into a salt (potassium chloride that is very similar to common salt).  It is this salt that will eat into the metal, especially in the presence of any moisture.

Tip 6: Coat It Before You Have to Remove Rust

Maintain your firearms by applying a thin layer of oil or grease to the metal after cleaning them. This will not only help prevent rust but also provide some protection from the elements and other outside factors like dust, dirt, and grime.  If you want to go hi-tech, research applying a coating such as Cerakote (check with your local gun shop). You can also coat your gun with wax such as Renaissance Wax.

Tip 7:  Use a Good Dehumidifier To Condition Your Safe

To keep the interior of your gun safe at a uniform relative humidity of 50-55% all through the year, when the outside temperature varies, is no easy job. With a fairly airtight seal on the safe, and occasional opening and closing of the safe, the humidity will fluctuate. A good gun-safe dehumidifier evens out the humidity inside and keeps it at the desired level by raising the temperature to the right level (physics!).

We like the Goldenrod Dehumidifier from Lockdown that comes in different sizes.  It is electric, reliable, and can be easily connected as most safes have either an electrical receptacle or a knockout to allow for a cable to exit the safe. (The dehumidifier has a removable plug.)

Protect your investment in guns with a few simple measures to control humidity, keep the guns clean, and store away from corrosive ammo. Use soft steel wool or a good steel wool pad made for this purpose, to remove early signs of existing rust.  Protect your safe’s contents by conditioning the interior environment by keeping it at the right humidity by using a dehumidifier. If you have a collection of more than a couple of guns, invest in a good gun safe to protect against fire, burglary, accidental access, and an easily forgotten threat: RUST!

purchased a SHELF PRICE for the Socal Eurovault EV-4517